Since Halloween was on a Monday Nick had to work and missed out on all the fun! I took the kids trick or treating by myself which actually turned out to be pretty fun. We drove to the "rich" Felida neighborhood near my parents old house. I figured the kids would get bigger candy bars that way, plus I know the area and trust walking around alone there.
The kids had SO much fun!!! I told Preston that we could only go to the houses that had their outside lights on so as soon as he'd get his candy at one house he would run to the sidewalk and look at the next house and then yell "Lights on, lights on" if we could go there next and he would run up to the door...Ash was having a hard time keeping up with him. It was hilarious!
Ash dressed as Lucy from the Chronicles of Narnia, and Preston was a fireman. 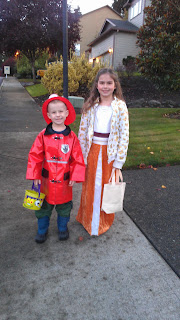 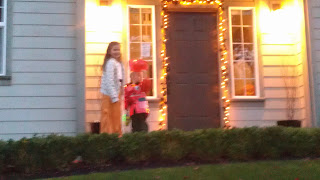 As soon as their buckets would get full they'd empty them in to a pillow case that I brought along and they would go get more candy. They ended up filling their buckets 3-4 times. We got a ton of candy. 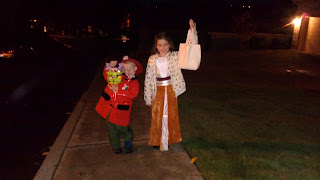 After 1 hour they were all done and were ready to head home. Here they are with all their candy. :-) I can't believe they got so much! wow. 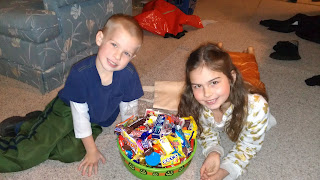 It was such a fun night. I'm glad that Preston isn't scared to go anymore and I'm glad that Ashleigh has patience with her impatient brother. :-) 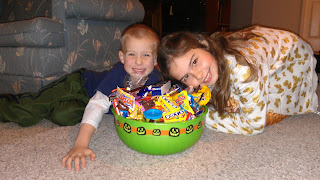