a BIG (snip) day for Nick

We finally decided it was time for Nick to get a Vasectomy. And boy was he excited about it! ;-)

Actually he was a pretty good sport about it and was nervous, but overall didn't mind getting it done.

On Monday the 31st, I worked until 1pm. We picked up Ashleigh at school and we took both kids to Kev N Jana's. (THANK YOU!)

Nick got annoyed with me taking his picture while we waited for Ash at school. 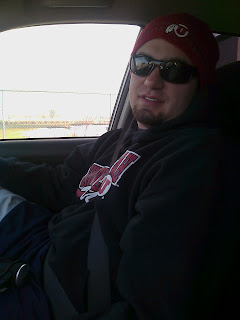 We actually got to the doctors about 10 minutes early, but the doctor was running late...so I took a picture of Nick while we waited...he looks deep in thought and very nervous. 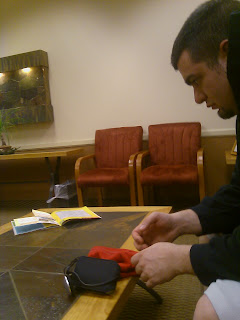 We finally got in to the procedure room 30 min after our appt time and then waited another 15 min for the doctor. It's not a good idea to make a man wait even LONGER to get his nuts cut--as Nick so affectionately calls it. lol. Poor guy probably would have been MUCH more nervous if it weren't for his Xanax which calmed him down, made him sleepy, and gave him an "I don't care" attitude. 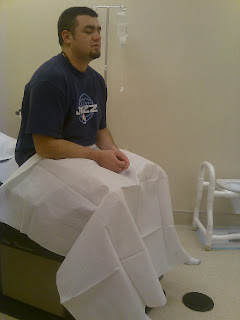 I was told by the receptionist a few days before that I wasn't allowed to be in the room to watch.
Bummer.
But I came on the day of the vasectomy with some questions for the doctor so they let me go back with Nick just so I could ask the questions. hee hee...the doctor let me stay!!! :-) he said as long as I didn't faint, I could stay. It was SO interesting to watch and it was nice to SEE that those tubes were cut, cauterized, and sewed shut!!! Woo hoo!!!

Afterward, nick was numb and drugged up from the Xanax so he was a bit wobbly when he walked and slightly slurred his words when he talked...but mostly he just looked like he wanted to sleep. (pic-in the elevator) 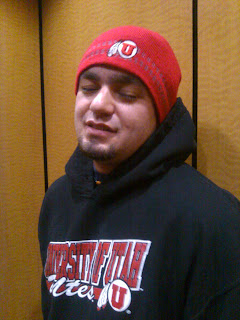 Nick talked to me a bit on the way home asking about the surgery and what I saw, how they did it, etc. He was texting his mom and some other people and he even ordered pizza for dinner. Then he started singing a very strange made up song and the next thing I know, he's sound asleep-snoring! I drive a 5-speed and his knee was shoved up against the stick shift so I had to keep shoving his knee out of the way so I could drive--he didn't even budge. he was completely out of it!
(pic-in the car on the way home) 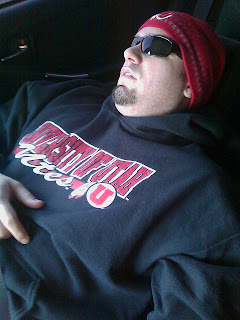 I got him home, woke him, helped him to bed, and gave him a Percocet to help with the pain once the numbing wore off, and gave him some frozen peas. Nick slept until 10pm. He decided at midnight that he was hungry and instead of waking me to get him some food, he went downstairs to get some of the pizza and a new frozen bag of peas. Poor guy could have fallen down the stairs or injured himself another way. He shouldn't have gotten out of bed at all that night...but he said he didn't want to wake me....oh-well.

Nick spent the next day and a half in bed or on the couch doing nothing but taking Percocet's, keeping frozen peas on him, watching tv/movies, using his computer, and getting waited on. :-)

I love taking care of my man and I was glad that he asked for my help numerous times!

He had to be back to work Wednesday afternoon and although I think he would have liked another full day at home at the same time I'm sure he was itching to get out of the house.

Nick is still a bit sore, but he's getting by just fine and will be back to his old self in no time! I'm impressed and very proud of him for braving this procedure. :-)
Posted by Megan at 7:18 PM

You are seriously the only person I know who would document such a private surgery! What a funny dau I have!! Love you tons! mom

Well, the blog is our "family journal" in a sense. Just be grateful I didn't put ALL the pictures I have on here... lol.
Love you and miss you!!!