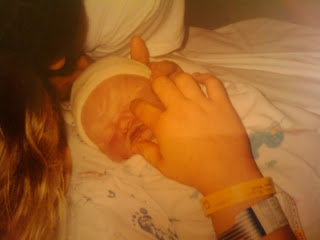 It's been 10 years since Christian came in to our lives and changed them forever. I remember that whole time so clearly, and yet its like a dream. Not quite reality.

It was real though. Every minute of it.

It all began around 2am when my contractions started. I think I called my mom first at about 4am who said it was still early in my labor and try to go back to sleep. My midwife, her assistant, and the apprentice came over around 8am along with my mom and Emily. I labored in our bed. I labored on our couch. I labored in the hallway. I even labored on the toilet--facing the back--which was my favorite place to labor. Around 12:30pm while laboring on the toilet, my water broke. Up until that point everything was going great! Heartbeat perfect, blood pressure perfect, baby moving down perfect, etc. all perfect. and then. just like that. the perfection ended. My midwife couldn't find a heartbeat anymore. She searched and searched, but nothing...only the faint sound of my own heart beating.

An ambulance was called to take me to the hospital--which ended up being pointless because the ambulance drove slower than the speed limit. As soon as we arrived an ultrasound was done. I remember seeing the guy take the wand off my belly and shake his head at the doctor--ever so slightly. It was nearly impossible to detect, but I saw it. the confirmation that I didn't want...my baby had died.

Now I'm crying. And contracting. And laboring. And waiting....Finally my body is ready to push. I push and push and nothing happens. I try different positions. nothing. over and over I tried...for 5+ hours. Finally...here HE comes. I didn't know before hand that I was having a son. I was pleasantly surprised. But it is nearly impossible for me to push him out. The doctor informed me after that HE was so tangled up in his umbilical cord that there was only about 4" free from the placenta to him. Each time I pushed I tore a bit of the placenta off, which caused a ton of bleeding and I was given a shot of something in my leg to help stop the bleeding. Basically, when my water broke, it strangled my son and cut off all his oxygen.

Finally my son is in my arms. He looks like a toddler--he's so big! He weighed 9 lbs and was 23" long. He was born at 7:55pm. He had the sweetest features. So soft and angelic looking. His eyes were closed, but I looked to see what color they were. most/all babies have blue eyes when they are born. Christian's were more like a cross between blue and electric purple. I still see that color in my dreams from time to time.

By then my dad and Patrick had arrived at the hospital as well. Shortly after Christian was born Nick's family arrived. When they got the call from Nick at 1pm that there was no heartbeat and we were heading to the hospital, they packed as quickly as they could and piled in to Nick's Supra and drove the 370 miles from Spokane to be with us.

to say that it was an emotional time would be an understatement.

that evening after everyone went home, Nick took a video of Christian and me, and we took a bunch of pictures. I was able to hold on tight to my baby boy and sleep with him in my arms all night. I didn't want to sleep because I knew that my time with him was coming to an end quickly. But eventually exhaustion took over and both Nick and I slept for a few hours.

In the hospital they did a lot of the things that they normally do with new babies...do their hand/foot prints, take their newborn pictures, etc and gratefully they did the same with us. We were also able to dress him in the clothes he would be buried in...a blue onesie/shorts outfit with a bear on the front and a blue knitted hat and little booties and a blanket.

On September 4, 5 days later we had Christians funeral. It was a small graveside service. I don't really remember much of any of it. but I remember how tiny the casket was...and how I wanted to look inside cause I didn't believe my baby was in there. I remember how everyone was crying. I remember not wanting to leave when it was over. I couldn't bear the thought of my son being left there all alone. I had such intense guilt and sadness and depression over it all.

Today, 10 years later, I am still sad on his birthday. I still miss him immensely. On the surface I wish that things had turned out differently, that he had lived, but deep down I don't. The only life I know is the one I have now and how can I possibly wish for something that would be so drastically different. IF Christian had lived, who's to say that Ashleigh or Preston would be here. Every single piece of our lives, down to a single thought or emotion, would have been completely different over these last 10 years.

Everything would be different!

Christian actually gave me the greatest gifts...the desire to want, need, and have 2 more kids. His brother and sister. My prides and joys.

Those 2 loves of mine went happily and willingly to visit Christians grave today on what would have been his 10th birthday. They helped decorate. They wrote messages on balloons for him. They made a border of pinecones and dandelions around his headstone. We hugged and cried a little. We talked about Christian and about the day he was born. Ashleigh still says she misses him, even though they never met here on earth. I've always believed that they knew each other in Heaven and that they knew Christians visit to Earth would be quick. Preston knows that he had an older brother who died when he was being born.

It was a sad, but good day today. If Christian had lived....everything would be different.

I'm glad it's not different.

I love you Christian. Happy birthday.
And Thank you.
Love, Mommy 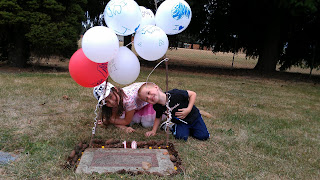 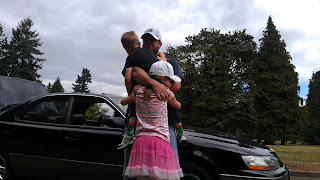 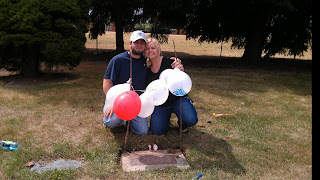 The tears are flowing as I live that experience through your eyes, and relive in my memory what I went through here when I got the news. I remember sitting on our front walkway, burying my head in my arms, and sobbing--hurting for you and wishing I could be there with you. And a few weeks later at the family reunion sharing your pain, as the pain that everyone was still feeling was very raw and real. I miss Christian too. But there's no denying he has blessed our lives, hasn't he?

I love you, Meg and Nick.

Oh Tam...I can only imagine how you felt being so far away and feeling completely helpless. I hate that feeling. You helped me SO much when you came for the reunion..you sat in the "green room" with me and asked me about the labor/delivery/Christian/how I was feeling, etc...and being able to just talk and cry and get it all out helped me so much! I wanted so much to share everything about him to the world and you helped me do that, just by asking me questions. You'll never know how much that meant to me!
Love you so much!

Wow Megan, I have never heard the full story and I thank you for sharing it. I had just started seeing David and was with him when Lauree came in crying and told us the news. I remember not knowing who you were but just feeling such sadness for your loss.
You and Nick are truly an inspiration showing us how strong and supportive a marriage can be and to never let a day go by without expressing our love for one another or for our family.
We love you guys and are always here for you!

Megan - I finally was able to get online to read this tonight (I'm in Boston). I cannot stop crying. The emotions are all right at the surface still after all these years. Amazing, huh? I remember telling myself at the time how I had to NOT cry, I had to NOT be overcome with grief, because MY baby just lost HER baby and I needed to be strong for YOU. Weeks later (after the funeral and 9-11 and our family reunion) I finally had my own little pity-party for losing a precious grandson and for my own sad feelings - and I remember sinking into a bucket of tears on my bed. It felt so good to finally be able to cry and not have to "be strong" for everyone else! I miss this grandson and am looking forward SO much to being with him for eternity. I just keep picturing him in Heaven with Great Big Grandpa Ballard learning how to fish (only there the fish don't ever die!) I know that he is your angel baby and that he is watching over your eternal family. I love all of you and miss you very much. Love, mom

Isn't there a "like" button I can push on these posts? :)

Meg, I'm so happy I was able to help in that small way. I remember feeling like it wasn't enough, but I'm glad it meant something to you.

And I'm really glad that you can sorrow, yet see the real positive that came out of Christian's death. Cherish those little ones. I love you!!

What a lovely tribute to Christian, and to your Ashleigh and Preston. Tears in my eyes as I read this post. I remember it, Megan. You might not...but I remember visiting you at your house after Christian's birth. Chris and I were getting married a week later and we felt so saddened and hurt for you. You have a wonderful perspective on Christian's life...and he has impacted you all for good. We love you. Happy 10th to sweet Christian!

@Annie--I remember when I found out you guys were expecting William and I just kept hoping that he wouldn't be born on the 30th like Christian cause at the time I was positive that it was bad luck and I didn't want anything to happen to your sweet boy.
Sure love you guys and am SO grateful that you have William in your lives..and katelyn too!!

I remember you being really strong. You took such great care of me and helped me so much!!! You had a ton on your plate all at once--losing Christian, 9-11, the reunion..whew...I could only imagine that you felt so overwhelmed. Thank you for EVERYTHING that you did for me and Nick. Love you so much!!!

@Reese--I actually do remember you coming to visit me! you brought me a little bamboo plant in a green pot. honestly, that was such a thoughtful gift!! I worked my tail off keeping it alive...I just couldn't bear for something else to die. when it did eventually die about 6 months later, I cried...pretty pathetic, huh? But you gave me something that was living and that I could take care of and that meant a lot. Thank you!! xoxo