At the end of August Preston got to get his cast off! Don't let this picture fool you, he was NOT happy to be at the dr's to get it off. He didn't think he would be able to walk at all with out it. 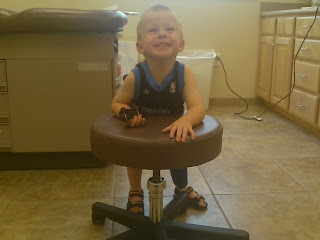 I had to hold him while they cut it off, so I didn't get any pictures. And as soon as it was done the dr and nurse left and basically just left me sitting there wondering what to do next! Preston was hysterical crying. He kept repeating over and over that he can't walk on his leg, that it hurts! sigh. I finally got an "after" picture before carrying him out to our car (he refused to walk on it). 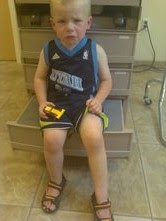 He cried at home and kept saying it hurt, couldn't walk on it, etc...about an hour later when I came home from getting Ash after school (Nick was home with Preston) he was up walking around with no problem! He kept saying--Look, Ashleigh, I can walk again! It was really really cute!!! He is doing great now and you would never know that he ever had a cast on at all!
Posted by Nick and Meg at 8:16 PM