Last week the door bell rang and to my surprise I opened the door to the Ch. 4 news man and a camera right in my face. They asked me about our neighbor who had been arrested a day or two before. I didn't know anything about what they were asking me...I found out that our next door neighbor (Heather) was arrested for possession and distributing the date rape drug (GHB). Apparently, the reason why she was caught was because a boy (whom she had drugged) had passed out on her front lawn and was vomiting while unconscious so she called 9-1-1 for help! After an investigation, they arrested her. She was home a couple days later (must have made bail). We have kept our distance from her...and her "roommate". What kind of ghetto ville did we move to!?! 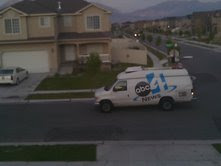 At work on Thursdays and Friday's we have about a 2 hour gap between scheduled maintenance employees. On Thursday when I got to work the first thing I heard from a customer was that the women's bathroom was really dirty. My friend/co-worker Becky said that that was the 3rd complaint she had heard about it in less than an hour. She decided that since maintenance was not there to clean it she would have to do it. (poor girl!!!) There was poop all over....like someone had pooped on the floor and then stepped on it and walked all over the bathroom leaving poop steps behind. It was SICK!! I told management that Becky should get a raise for doing that, but they told me that maintenance actually makes LESS than becky. (poor maintenance people!) Becky thought it best to wear the full personal protection gear. She's so cute/funny!! :-) I don't think I would be smiling if it were me going in there to clean up other people's poo! 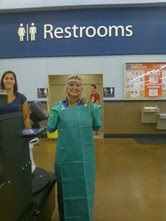