We got Papa Murphy's pizza for dinner (thanks Betsie for the idea) and while we were waiting I took a couple pictures.

WOAH, extreme close up of Nick! 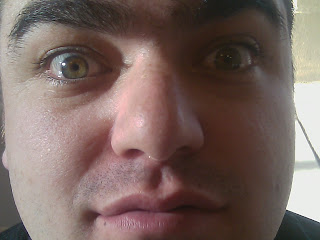 My cute family...Nick and I were completely matching today..I wore khaki shorts and the same UTAH shirt as him! We're so cute. Lol. ;-) We are also in the midst of potty training Preston...it's the 3rd day of it today...each day he has only had 1 accident! (Yay) Today was the first day we decided to actually go run errands while he stayed in underwear. We were gone 2 1/2 hours and he never once went pee in his underwear. We did try to make him go though....at Papa Murphy's while Nick and Ash waited, I took Preston outside and around to the back of the building to see if he wanted to try to pee. He immediately pulled down his pants and underwear and started to try to pee...he never did (he was afraid that he would pee on his pants instead of on to the plants), but when we got to the car where Nick and Ash were waiting he got inside all happily and said "daddy, I pooped out my penis on the bushes!" We laughed so hard! Such a funny funny boy!