We have a Rainbow vacuum--it uses water--so after we vacuum we pour out the water, etc in our back yard next to our house....the other day we were out back and noticed this large mound. At first we thought it was a nest of sorts, but after a closer look realized it was mushrooms!!! I've never seen mushrooms growing anywhere in utah...pretty sick that our carpet left-overs grew mushrooms! I reminded Nick that he eats mushrooms...now, he may as well just lick our carpets! sick!!! 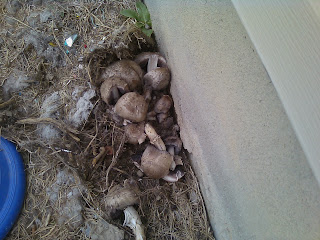 I was standing in line at the bank and a gentleman comes up behind me in line and starts chatting with me about all sorts of things. he was holding 6 rolls of pennies in his hands. He was homeless. Such a nice old man..... I snuck a picture. 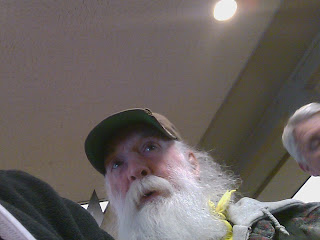 Came down stairs in the morning to find my kids had gotten themselves breakfast and were fully entertained watching a movie. I should have gone back to bed. ;-) I love that my kids are basically self-sufficient and I don't have to worry about them in the morning. 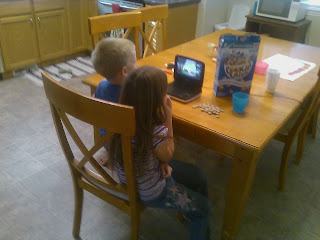 I swear, every time I give Preston a bath he looks older to me. I hate it! I want him to stay my little baby forever! Here he is after his bath looking oh so cute! We haven't cut his hair since September so it's getting pretty long.... Nick and I think he looks like one of Ryan's boys. 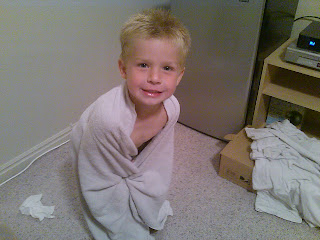 Nick and Preston came to visit me at work and then went to visit Juli, et al at her work. Preston loves playing her ipod games. :-) 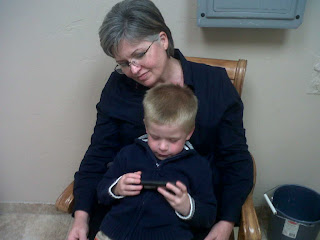 Finally...Preston can write his name! (mine on top, his below) he still has to look at the letters that someone else wrote in order to write them himself, but it's a start. Since he stopped going to preschool I was afraid that he wasn't learning as much anymore but it looks like he's doing just fine. And now he's doing addition--using his fingers--it's so cute! 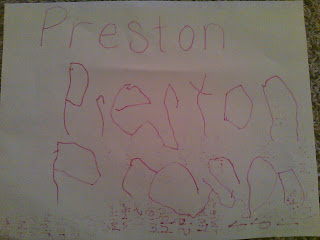 I LOVE the pic of Preston in the towel.....PLEASE don't shave his head again! He looks so handsome with hair!! ;)

I agree with Em--I love Preston's hair that length!

And good job, Preston, on writing your name!! Smart boy!