I LOVE Ashleigh's school....It's a charter school and she has learned SO much this year in Kindergarten. Every Friday she has music and Spanish. I think it's cute that she learns Spanish. At the end of the year the school puts on a Spanish Program. The Kindergarten class sang Itsy-Bitsy Spider in English and then in Spanish. We couldn't hear it, or understand it, but it looked cute.

Waiting to go on stage--with their spider hat costumes on. 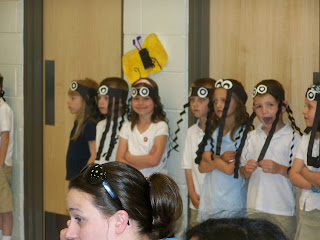 On stage waiting to start the song...see the kid on Ashleigh's right side? That's Jayce...HaHa...he just had to stand next to her! I hope for his sake that they are in the same class at school next year! Lol. 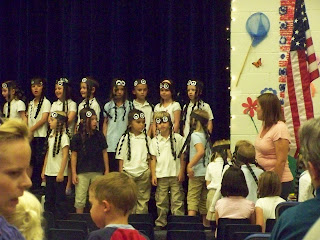 The video of their song. It's pretty much impossible to hear or understand it and it was so loud there! Oh-well!

and we enjoyed being there to see it - even if we could barely hear it! Love you guys. mom