This afternoon Preston was upstairs napping, and Ash was out playing with a neighbor friend so I took that time to relax on the couch. A few minutes later the door to our house from our garage opened a tiny bit...I first thought it was Ashleigh, but then I saw an adult hand...I was confused for a split second and thought it was Nick but quickly realized it wasn't him when this man stuck his head in our door. He looked at me, at my surroundings and back to me again. I curiously said Hello? He didn't say anything back to me, so I loudly told him to get out of my house! Again, no response, so I swiftly got up off the couch and started yelling--and swearing--for him to get off my property!!! He finally started to back off our steps and slowly out of our garage. I kind of just stood there-dumbfounded and watched him go. Then my brain kicked in again and I grabbed our camera, went out the front door and took 2 pictures of him as he wandered down the street. 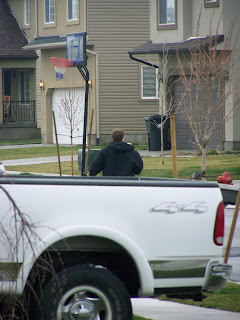 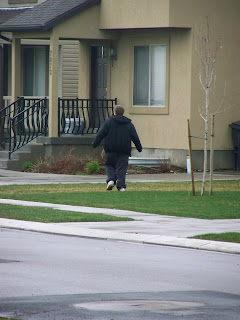 I called Nick who told me to call the police. After talking to the dispatcher I called Nick back. A Sheriff came and I went out to talk to him. I found out that this man has severe autism. He lives with a family who locks the fridge and pantry so he can't eat more than they give him...and I guess he likes to eat A LOT!!! Once they lock the food up, he gets upset and starts wandering the streets in search of food.

A few weeks ago, a neighbor lady came home to find him IN HER PANTRY eating her food!!!
I would have flipped out!!!
The Sheriff told me that from what they know of this man, he is harmless, just looking for food. He advised me to keep our doors and windows locked and he is going to talk to the mans family about doing something more "permanent" to keep him from wandering the neighborhood and scaring the neighbors. I thanked him for his time and for explaining the situation to me. I should hear back from him in a day or two once he talks to the family. I sat down with Ash and talked to her about being safe--Don't talk to strangers, don't open the door to anyone--even if she knows them, etc! Thankfully, she is a very smart girl and understands that it's important to be safe!!!

Scary day!
I am so thankful that it was just a "harmless" autistic man and no one who posed an imminent threat to me or my family!
Posted by Nick and Meg at 4:40 PM

Wow, that is scary!!

i would have freaked out big time. Especially here. Im glad youre safe

Holy Moly!!! Was that today while were downtown at the Tea Party? You are so very smart to have known to get the camera. I am so thankful you are ok. So Scary. Wow!!!

Did you know that you can shorten your urls with LinkShrink and get $$$ for every visitor to your shortened urls.