Thankfully, both kids were feeling MUCH better on Saturday (I forced them both to take a nap, just to be sure) so they got to go trick-or-treating! Yipee! At about 530, I started getting them ready, but at 6pm I looked outside and noticed kids everywhere already trick-or-treating! Good grief! So, we kicked it up a notch and hurried faster to get ready. Nick had to work so we went his parents house so Juli could take the kids with me. We got there a bit before 7pm and about 1/2 the houses on the block already had their lights turned off! I am surprised every year here in Utah--I remember trick-or-treating as a kid until 10pm or later! Here, everyone is done by 8pm! It's so strange!
The kids, on the way to Gma and Gpa Call's house 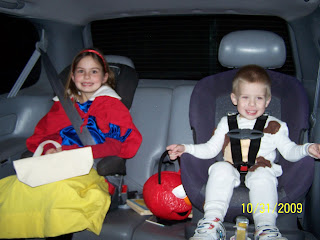 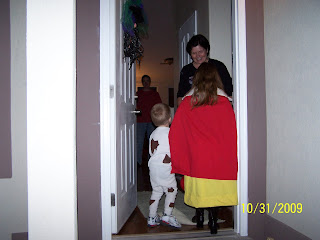 The 2nd house we went to had this vending machine thing and each of the kids got to play it and win a prize. It was a fun twist to regular trick-or-treating! My kids loved it!! But, this was the first stop to Preston getting scared....one of the guys there had a mask on and it freaked Preston out! He did not like it at all and started crying. Even after the guy took the mask off and smiled at Preston, he did not calm down until right before his turn at the toy. He was a very sensitive boy that night! 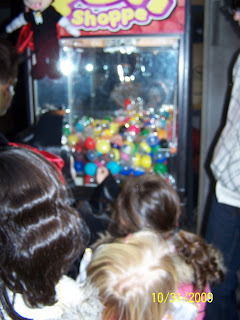 Preston preferred the houses that only put out buckets of candy, so you didn't have to ring the door bells, but even that was scary for him at times--one door had a poster of dracula or something....scared Preston again! And one guy's house was the worst.....he had a couple of dogs, one of which ran out as soon as the guy opened his front door. It was a little thing, but Preston is afraid of dogs....I think I've been telling him not to touch them too much because he is allergic and now it's made him afraid! He cried and cried and cried and absolutely refused to go up to the next house...that lady at the next house was fabulous! She practically begged Preston to take her candy. It was really sweet. After a bit though, he was fine again and happy to "play this game" 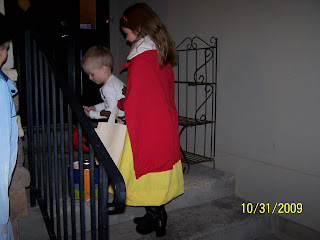 Ashleigh was wonderful, as usual! She was shy....a little hesitant at times, but was polite, and kind, and perfectly mannered like she usually is. That girl is just so wonderful! I love her so much and often feel bad that Preston gets so much more "attention", when she is the one who is being so good! I remind myself daily to focus more positive attention on her rather than negative attention on Preston so she gets the rewards for being good. I love that she loves the holidays and loves trick-or-treating and gets so excited to go and be all dressed up. I think we'll have 1, maybe 2 more years of her being Snow White and then we'll have to find her something else. That costume sure has had a lot of good use out of it! (Thanks, mom Call) 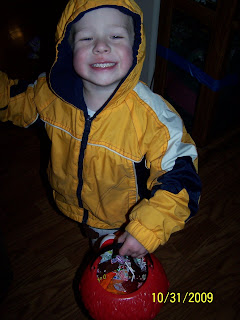 The end of trick-or-treating! The kids with their loot. They only did 1 block, but I think they did good....

We hung out at G'ma and G'pa Call's house until Nick got home from work and met us over there. 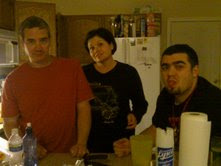 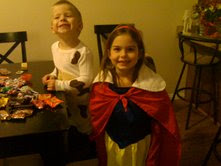 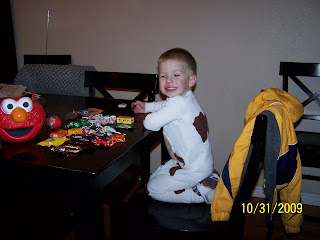 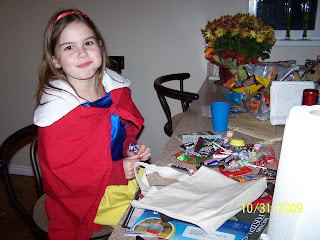 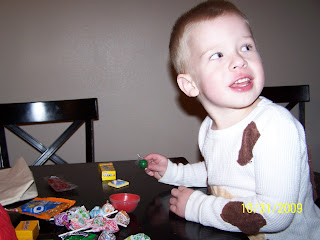 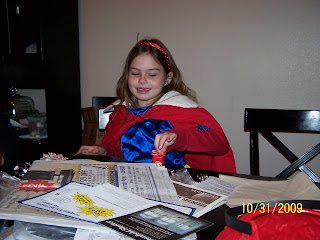 Every time the door bell rang Preston ran to the door to give out the candy. I think he liked doing that more than the actual trick-or-treating! Lol... We missed daddy with us, but we loved having Juli with us and I think we all had a lot of fun. :)
HAPPY HALLOWEEN, EVERYONE!
Posted by Nick and Meg at 8:01 PM