Nick and I went to Tucanos for his birthday dinner. We had so much fun spending time together. 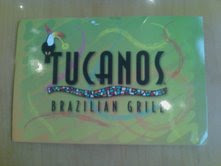 I love restaurants cause they usually send a gift for a free meal during the month of your birthday, so it makes eating out more fun and affordable! :-) 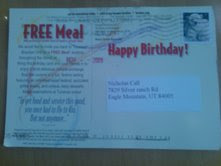 I made sure to embarrass Nick by telling the servers that it was his birthday---they sang to him in Portuguese. It was great! Nick was up dancing, but the song was so short I didn't get a pic of him until after. It was so funny though! :) 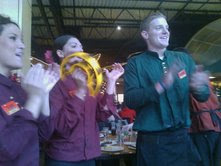 After the birthday song--he doesn't look embarrassed, but he was! :-) 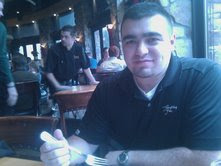 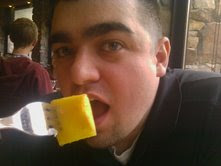 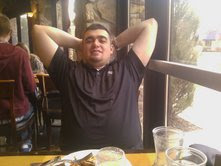 dessert---Raspberry cheesecake. It was SO tasty. YUM 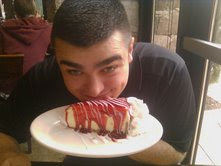 But after dinner, not so great. I felt SO nauseous all the way home and started puking at home--and all night long. And finally stopped at 130am. But at midnight nick started feeling sick too...ugh. I think we both had a mild case of food poisoning--me worse than him. What a great way to spend his birthday, huh?
Posted by Nick and Meg at 11:39 AM