Preston was ALL better on Thursday but Friday his temperature went back up and he was struggling to breath a bit so Nick suggested I take him to the doctor to get checked out. We went to InstaCare (quacks!) and the doctor didn't even bat an eye when I told him Preston had a fever. The doctor said--no he doesn't, his temperature came back 97.4.... Um...No, the nurse never took his temp! Seriously, she never took it! whatever!
So, he told me Preston's lungs sound really tight and he is weezing a lot (DUH!) so they did a breathing treatment (which we already do at home) I rolled my eyes as the doctor left. But, after 10-15 min when the treatment was done, ALL the wheezing was gone and he was breathing fine! (What the crap?!?!)
The doctor came back in with a "know it all" attitude and basically said--see, all you had to do was the albuterol and he would have been fine! So, I pushed him...I said there is NO way, that the only thing you put in the nebulizer was Albuterol! So he reluctantly asked his nurse....and with a little bit of humilty came back and told me that they put a steroid in it too!
A-Ha!
See, I knew Albuterol alone wasn't fixing the problem! I insisted that he give Preston a prescription of the steroid they used!
After that 1 treatment, Preston has been fine! He coughed some on Halloween during trick or treating, but otherwise has been fine! Amazing.... 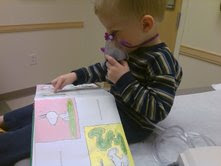 Preston at the doctor reading Snoopy
& with his dinosaur mask 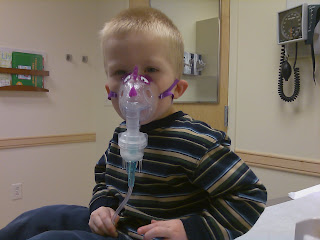