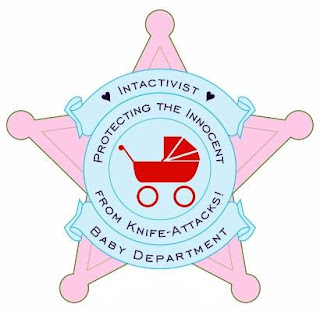 A while back I did a ton of research and made a blog post, as part of my own personal journal,
about my feelings (and the facts) behind infant circumcision. I've since decided that I need to
simplify it.

THIS website is very informative and one that every parent who is having a son should check
out to help them decide whether to circumcise or not!

THIS video is very medically informative and very important to watch. it's about 19 minutes,
but definitely necessary...

THIS article is also very interesting--I've heard from a few mom's that their son "fell asleep"
during the circumcision! Babies do not sleep through circumcisions. Some babies may
appear to be asleep because they withdraw as a coping mechanism. When the baby is
monitored for signs of stress and pain, medicated and "sleeping" babies have elevated levels,
indicating that they do feel what is happening.

IF you decide to circumcise your son you NEED to look at THIS consent form first....read it
carefully....

Here is some other information about infant circumcision (by a U.S. Physician)

A Short History of Circumcision in the U.S. in Physicians' Own Words

1860: 0.001% of the U.S. male population circumcised
"In cases of masturbation we must, I believe, break the habit by inducing such a condition of the parts as will cause too much local suffering to allow of the practice being continued. For this purpose, if the prepuce is long, we may circumcise the male patient with present and probably with future advantage; the operation, too, should not be performed under chloroform, so that the pain experienced may be associated with the habit we wish to eradicate."
Athol A. W. Johnson, On An Injurious Habit Occasionally Met with in Infancy and Early Childhood, The Lancet, vol. 1 (7 April 1860)


1887: 10% of the U.S. male population circumcised
"There can be no doubt of [masturbation's] injurious effect, and of the proneness to practice it on the part of children with defective brains. Circumcision should always be practiced. It may be necessary to make the genitals so sore by blistering fluids that pain results from attempts to rub the parts."
Angel Money, Treatment of Disease in Children. Philadelphia: P. Blakiston. 1887, p. 421.


1971: 90% of the U.S. male population circumcised
"There are no valid medical indications for circumcision in the neonatal period."
Committee On Fetus and Newborn. Standards and Recommendations for Hospital Care of Newborn Infants, 5th edition. Evanston, IL: American Academy of Pediatrics. 1971. p. 110.

March 1st, 1999: 57% of newborn males in the U.S. circumcised (33% in California)
After a two year investigation, the American Academy of Pediatrics(AAP) concluded that the "potential medical benefits" of infant circumcision aren't significant enough and therefore, they do not recommend it as a routine procedure.

Parents have been brainwashed into thinking the intact penis is ugly and a source of disease.

Fathers erroneously want their sons to look like them.

The male ego will not allow itself to accept that infant circumcision is sexually destructive and that he is not 100% as nature intended.

So, after all this...are you still going to consider circumcising your son??? I hope not, but more importantly, I'm sure your son is hoping you don't!

Circumcision SHOULD BE your SON's decision!!!

Well written article. Thanks! YOu did a good job researching. How about mentioning the botched circumcisions and the problems they cause (without mentioning the names of those we know with this problem). Reconstructive surgery when in their teens is NOT fun!! Love you.

I thought about adding that in...did you know, here in Utah, a nurse was given the chance to perform one herself and she didn't use the ball thing and "accidentally" cut off the entire head of the penis? Bet those parents were pissed!!! I know I would be! Poor little baby!!