Fun morning for the girl cousins...and then a date with Nick

My parents are so sweet...they asked if Ashleigh, Maura, and Teriesa could come with them to a benefit party at the park yesterday morning. Ash was so excited to be able to spend the day with them! I don't have any pictures of it (mom?), but as far as I know, they played at the park--there were kid games, etc, got cotton candy, went to Wingers for lunch, then back to the park for more fun playing. Nick said that Ashleigh was sad to come home after....

Later that night my parents came back over to babysit the kids so Nick and I could go on a date. They actually suggested that we go, and offered to come babysit! It was awesome! Nick and I went to Salt Lake City to see a cello concert at the Assembly hall on Temple Square 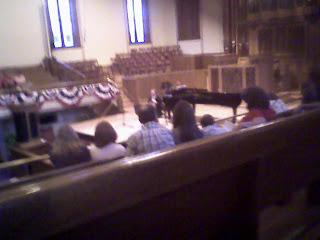 then we went on a walk around Temple square and the conference center. Then we went to Wendy's for dinner and finally I had to go to work... :-( Nick went back home to relieve my parents... (FUNNY story---as you can see it was not a packed house at the concert so as a result there was a man sitting about 10 feet from us all by himself. Something was definitely not right with him... towards the end of the concert Nick and I heard this short noise-he looks at me and says, did you just fart? I said---NO, it was that guy! I thought to myself--about that guy...ok, well, accidents happen--ya know, you try to sneak out a little one and it's accidentally loud...ok, whatever. But a few minutes later nick and I happen to glance in his direction at the same time and we see him lift his left butt cheek off the seat and like pull it apart and he FARTS, LOUDLY and a few times in a row! Nick says he locked and loaded and let it RIP. I had a hard time containing my laughter! We both said after that we just hope the cellist and pianist didn't hear it! Some people...sick...seriously!)

At my house, my parents started out by playing a version of go-fish, then Ring around the Rosie, London Bridges, Grandma-May-I, Catch with balls, and hide and seek. Then they went on a LONG walk and finally started watching the Bee Movie when Nick arrived home. Mom was the only one still awake---my dad had even fallen asleep with both kids while watching the movie. I wish Nick had gotten a pictures.... My mom had even found time to clean my kitchen! :) What a sweet thing to do!!!! (Good effort on loading the dishwasher! ;-)

When I woke up this afternoon Ashleigh just went on and on about how much fun she had with grandma and grandpa and told me all about what they did. She loves having them close by again and oh man, so do I!!! It's been GREAT!!!!!!!!!!!!!!!!!!