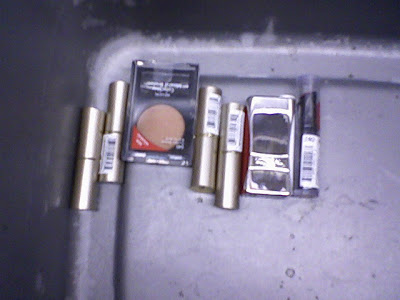 I have yet another work experience for you. (SORRY I AM LONG WINDED....)

Last night was a very busy night--it started out good I was going going going until about 130am when I finally had my first break. After break it had slowed down quite a lot so we were able to get our "work" done.

I was at the customer service counter when a male customer came up with a return--he had some make-up that his "girlfriend had bought with their stimulus check". Can you see it? 5 tubes of lipstick, some blush, and another lipstick/gloss compact thing. He did not have a receipt for all this makeup. I was going to refuse the return but he kept saying over and over that he needed to return all this so that he could buy stuff for his new baby...I decided to go ahead and return it--the money would go on a gift card, so I felt comfortable that this man could not use the money for drugs or whatever--he would HAVE to spend it at Walmart. He pulled out his ID and the last digit of the year was punched out--I couldn't see what year his ID expired so that made his ID invalid and not legal. I refused the return. The man argued with me so I called my boss up to reiterate what I was saying and my boss also said NO to the return. the man left.

About an hour later (While my boss was at lunch aka not available to help) this man came back--WITH his girlfriend AND their new baby...(It was 330am)...he wanted to do the return with his girlfriend's ID (I told him earlier that I couldn't use her ID with out her there). He gave me the ID...it had been folded in half so the laminate was lifted a tiny bit across part of her face on the picture--I could still tell it was her, and all the other info on the ID was valid, but before I could stop myself I said that the ID was invalid and that I couldn't do the return. Pretty much I just felt that the merchandise had been stolen and I really didn't want to do the return. However, he ID was still valid--nothing was altered...I just spoke too soon. I was frustrated by these people---I put my head in my hands and pretended to be looking closely at her ID while I listened to the two of them TALK and TALK and TALK...they would NOT shut up! For example-- "I've been pulled over by cops and they've said as long as the lettering is not altered than the ID is fine" "you have to do the return so I can buy stuff for my baby" "My baby is only 2 weeks old and has gone through more than 100 diapers, I have to buy diapers!" and on and on and on....the conversation just kept going and going..it was driving me crazy! Seriously, I wanted to just stand up and punch them both in the face. It was the first time since working there that I actually had that war in my head and I really didn't know what way to go...and my boss was at LUNCH!!! ugh....

After what seemed like FOREVER, I finally just threw my hands up and started processing the return. The man did tell me thank you and once again said that he was only returning this stuff so that they could get baby items. (He did YELL at his baby to NOT wake up when he saw it stirring--hello, it's freaking 330 in the morning!!!) I ended up putting $66 on a Walmart gift card. I was mad, but sent them on their way (they asked where the baby section was)...and they went shopping in the store for a bit.

Just a few minutes before I left for lunch I saw the duo come up from their shopping trip...I was still fuming about the return and I had told more than one co-worker that "they had better come up with baby stuff or I am going to lose it!" I'll bet you can guess what they had in their cart...yup...NO BABY STUFF!!!!! They had popscicles, rice krispy treats, oreos, movies, and a single onesie outfit. I was PISSED!!!!!

I took off to take my lunch and while I was looking through the store to figure out what I wanted to eat, I realized--hey, I'm off the clock, I can go and tell them off! So I went back up to the front of the store but they were gone. I went out to the parking lot and they had already left. I walked back in, bought my lunch and went upstairs to eat it...I started crying. I was so disappointed in myself for not listening to my gut instincts. And I was even more pissed that I let that guy pull the wool over my eyes-so to speak-so I would do the return for them. I felt bad for the baby---s/he deserved to have parents who would buy it was it needs and now I am positive that these parents aren't doing that!

here is a picture of me--pissed off in the break room.... 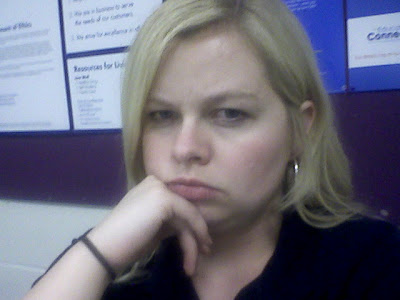 Here is a picture of my CSM supplies-- 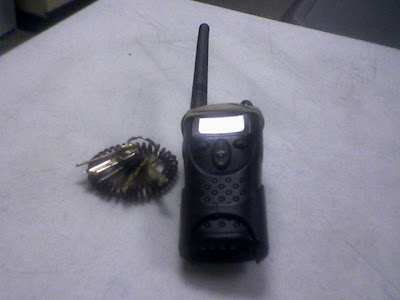 I get a walkie-talkie and a set of keys.
Woo hoo, don't I feel important! ;-)