I've been annoyingly tired lately and I was really afraid of falling asleep on the way to work so I didn't go last night. Instead we went grocery shopping and enjoyed some family time.

Here's Ash being cute... like her outfit? We were watching the gymnastics part of the Olympics and Ash decided to get her gymnastics suit on and do some moves. She needed the wrist bands to help protect her wrists (like when the gymnasts tape up their wrists) and then she pretended that she was putting chalk on her hands. Then she would run, jump on our mini trampoline, jump off and then salute. It was so cute! I told her she had to cover up before going to the grocery store so she put on her towel-dress. Then complained cause she was cold--go figure. 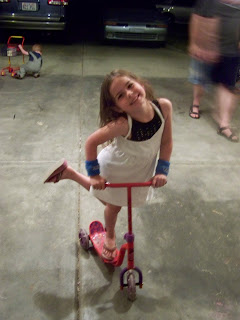 Preston LOVES to play with Nick's tools. We never let him, but he slipped by us, played for a minute, and then closed the drawers while babbling something that actually sounded like he was scolding Nick for leaving the drawers open. It was so funny! 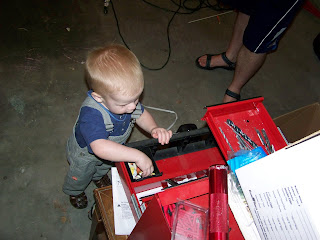 Ashleigh and her little friends ate an otter-pop and left the wrapper in our yard. Nick is telling her to go pick it up and put it in the garbage, and Ash is claiming she can't see it. I finally got annoyed and went over and walked her to the trash and made her pick it up. 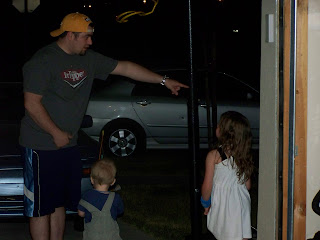