Ok, my son has a very strong sweet tooth. He would rather eat cookies, cake, pie, chips, candy, etc, than anything else. We have struggled to get him to eat healthy food for the last few months. He'll have breakfast and/or lunch--with out much of a problem, but he will literally refuse to eat dinner. We've let him get away with it until a few days ago. Nick and I finally decided to put the kibosh on it! He has gone to bed "hungry" 2 nights in a row--after refusing to eat dinner and throwing tantrums to have treats instead, we sent him to bed early with nothing to eat. Today, a break through!!! This morning he ate ALL his breakfast...and had seconds. He ate ALL his lunch and didn't even ask for a treat after. The only "bad" thing he had to eat was 4 Ritz crackers! Tonight, he refused to eat his dinner, however, after dinner was over and he realized that I was not going to give him any cake he started asking for dinner. I could literally see the light bulb turn on over his head--

"If I eat something good, I can have cake" 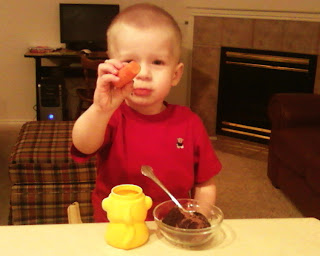 Bravo!! Bravo both on the couponing and on getting Preston to eat!! YAY!! Love, mom