Betsie and I got together to run a few errands and have a day out together with the kids. We went to IKEA first....

We got inside and Betsie went to get the 1 and only cart that was on the main floor. Just before she got there another lady came and took it first! RUDE! And what made it worse is that when we saw her upstairs she didn't even bring it up with her! She left it at the entrance!

The kids all wanted to ride up the escalator to the upper floor....I was first with a couple of the kids, and betsie was in the back half with a couple more kids... Josiah and Jennidee were behind her. I think what happened was they didn't get ON a step, they were on two steps so when it separated and it started going up, they fell down and started rolling over on each other down the escalator while it was going up....I kind of freaked out, but froze and didn't really know what to do. Bets went into mom mode and let go of the kids she was holding hands with and like sprinted down the escalator to help get Josiah and Jennidee up...NOT an easy feat!!! One of the IKEA workers ran towards the escalator to help, but stopped at the bottom, I think, when he saw that Betsie made it down there, but hello, she still could have used the extra set of hands!!! We all made it to the top, but the poor kids were crying and so scared! Jennidee attached to me and Betsie comforted Josiah. After they calmed down she was able to assess the situation. Jennidee had some scratches on her back and this is what Josiah's face looked like. It was so sad!!! needless to say, we avoided the escalators from them on! 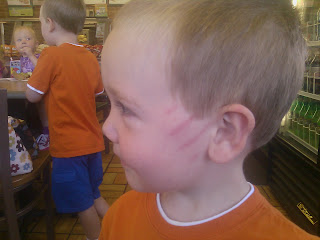 After IKEA we stopped for lunch at Subway. I am amazed by how well behaved Betsie's kids are!!! They never threw a tantrum, they obeyed Betsie every time, they were so calm and happy. It was such a joy to be around them all!!!

Then I got lunch for Nick and his co-worker and we all went to show Betsie where he works. Then we branched off--Betsie went home to put the kids down for a nap and I took my kids to Cookie Cutters to get their hair cut.
Here's Preston's new do! 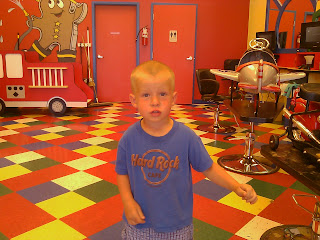 I had earned a free hair cut-from getting P's hair cut so often-so I let Ash get her hair trimmed. They took about 2" off and then they styled it. I LOVE how they do her hair. I seriously have no talent in that department. I like having her hair done, then she actually looks like a cute little girl rather than a ragamuffin. Lol. :-) 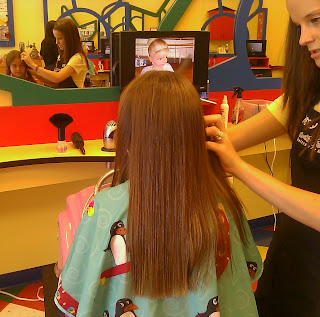 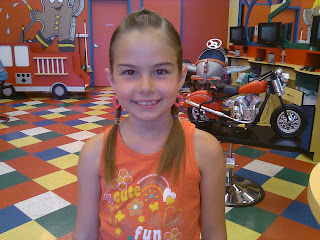 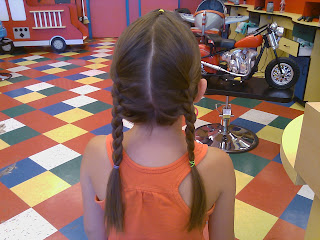 We had to run a bunch more errands on our way home. It made for a long (HOT) day, but it was so much fun spending the day with Betsie and her awesome kids!!!
Posted by Nick and Meg at 9:40 PM