Last night I decided that it is time to wean Preston off of bottles. He usually only has one to go to sleep, but knows how to manipulate us-saying he's tired and is going to sleep but once his bottle is all gone he'll get up and suddenly not be tired. It's not really an annoyance, but he is 2 years old now so I figured it's about time to get rid of them.
Anyway so I told P it was time for bed and immediately he asked for a bottle. I told him they were all gone--which was true, they were all dirty--so I offered him a sippy (he got upset, but I ignored his outburst and went right along like nothing was out of the ordinary).
I did my usual routine to put him to bed, and he came out of his room a twice, but I was consistent and kept putting him back to bed and pretty soon he stayed. Yipee!
However....after we put him to bed the first time, Nick and I went to put Ashleigh to bed and had scripture and prayer with her. And this is what we found when we came out of A's room.
Preston had fallen asleep outside the door. 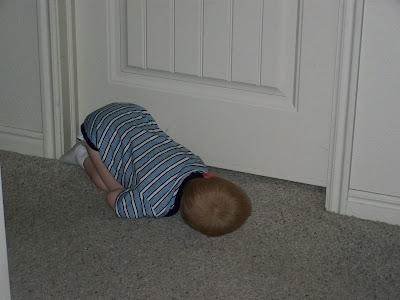 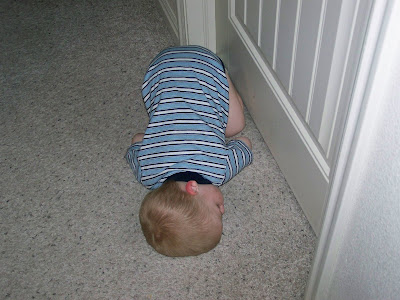 So far today he has not had a single bottle and I am not planning on giving him any! I hope this is the end of the bottle. :)
Now if we can just get him to sleep in his OWN bed ALL night long! And then get him potty trained. We've got a big big year a head of us for him...
Posted by Nick and Meg at 12:17 PM