Please welcome Tucker to our family! We've adopted a mini dachshund. He is 1 1/2 years old. He has a very sweet disposition and temperament. He is a cuddler, he loves to play, he LOVES to lick and likes to be pet. He is GREAT with the kids--Preston especially. *pfew* 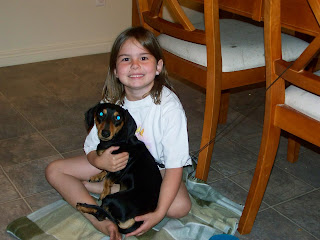 We adopted him from a family who is moving to Washington and couldn't take him with them...we got a really good deal on him. I was a little worried at first cause Preston has shown signs of allergies to dogs in the past so I brought Preston in to let Tucker lick him and see if he broke out in hives. He did...with in a few minutes Preston's eyes swelled shut and his face broke out in hives....ugh. Then I looked up and saw a CAT leaving the house....

So, I took a chance (after giving Preston some Benedryl) and we decided to take Tucker home with us. 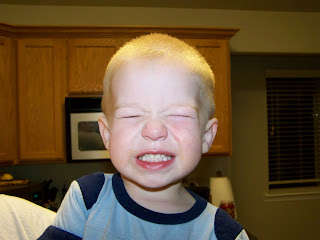 His parents were nice and gave us his collar, leash, food, treats, bones, car carrier, and his bed--which is a crate type thing. I put Tucker in the car carrier to come home and immediately he started barking/crying/whining...

HOWEVER....with in a couple of minutes he calmed down and was quiet the whole ride home. The Benedryl kicked in and Preston fell asleep...ahhh...peace and quiet! :)

As soon as we got home I took Tucker up to take a bath--get all the cat off him, I threw away his toys and his blanket. then we washed his crate/bed and pretty much everything else that came home with him. Then Ash, Preston, and I changed our clothes and washed with LOTS of soap.

Nick came home shortly thereafter and we started strategizing about all the details of having a dog--where he is going to sleep, how do we keep Preston away from his food/water, Who is going to take him out in the morning/evening, etc. 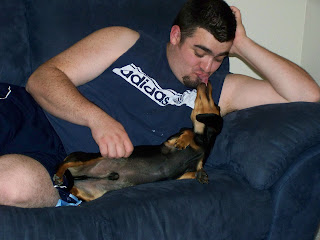 After trying to put him to sleep in his crate in the kitchen--BIG MISTAKE--we moved him to our bedroom in his crate and he fell asleep quickly and slept the whole night with out making a peep (except when he heard the wolves outside howling) ha ha. He was a perfect new member of our household. 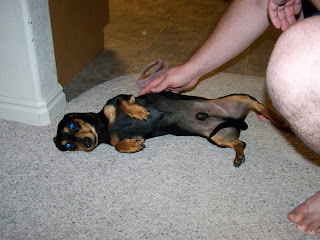 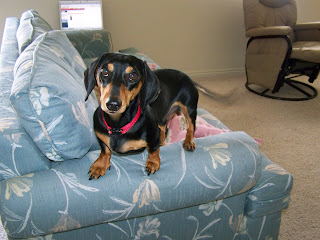 It's been almost 3 years since we had to put our old dachshund Howie to sleep. We were finally ready to get another dog...and Nick and I are so happy with our choice. Tucker is VERY much like Howie was--not just in looks but in personality! he's a great little dog and once we can get Preston's CAT allergies under control, I think we'll be one big happy family! :)
Posted by Nick and Meg at 2:06 PM

ahhh, he's adorable. Matt has convinced Brinley that we should get a Schnauzer...I think right now, a baby is enough for me to take care of.

My dog is cuter than your dog! Ha ha ha. LOL. Tucker is very cute and I hope they can be good friends... You know like Howie and Jeffrey.

Congrats on the new addition!

What happened to "we're just not pet-people"?? Congrats anyways! He does look like Howie! Skinny like him, at least! What a cutie!

A dog and no fenced yard? Are you kidding? I think fencing material should be next on the list...! Dad says Tucker is delightful. Guess I'll have to drive on out there to see, eh? Love you. mom