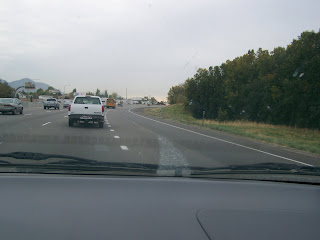 I was a parent helper for Ashleigh's very first field trip. All 4 kindergarten classes went to Pumpkinland in Orem. She got to ride a
school bus (still cool for a 5 year old) and have her mom there all day (also still cool at this age). As a parent helper I was in charge of 3 kids-Ashleigh, Madisyn, and Errina. Ashleigh and Madisyn get along great and they have very similar outgoing personalities, but Errina is VERY shy. She did not say a single word the whole day. She would nod or shake her head but I never heard her utter a word--to anyone, not even her peers. She has a very sweet disposition though and I thoroughly enjoyed spending the morning with all 3 girls! It was a great success! :) 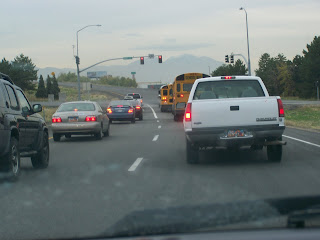 I am following the bus...Ashleigh's is the 2nd one. 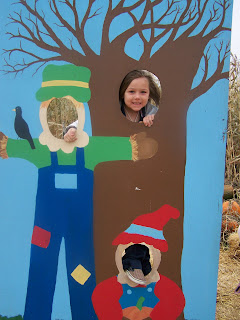 Haylie popped her head in this picture before my girls could get in there...Haylie is one of Ashleigh's school friends. 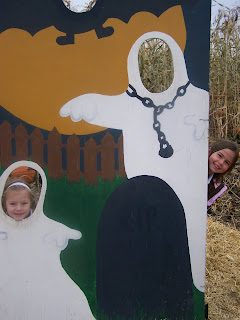 Madisyn is in the hole. See Ash on the side? ha ha, she's so funny! 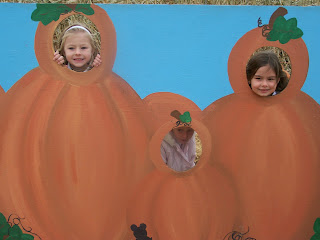 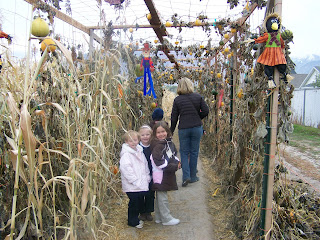 The pathway was surrounded by strange looking gourds. Forgot to take any pictures of them up close. 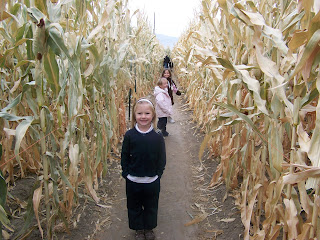 They had a corn maze too, but we never figured out how to get to the end so the girls opted to turn around and go back through the entrance instead.
Madisyn in front, Errina in the middle and Ashleigh in the back 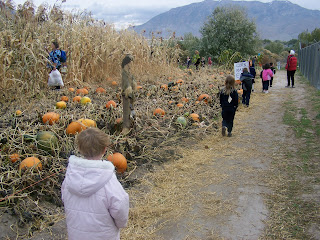 The sign in this picture is where the exit is--but we never made it there. Oh-well.

By the way---it was SO cold! The wind was intense. I had long sleeve shirts on and a coat and yet my teeth were still chattering. I was just glad it was not raining! 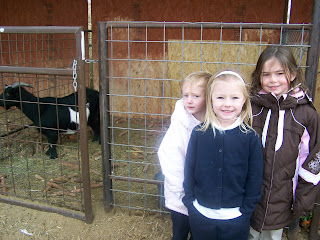 After the maze and the crazy gourds we met some animals...first were some goats. They were so cute!
Errina, Madisyn, and Ashleigh
The height difference is what amazes me...they are all 5 years old! 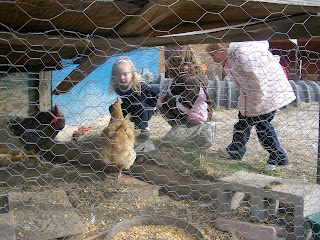 Then we saw some chickens. We spent a lot of time looking at them. This was one of the only times I saw Errina come out of her shell--she would crouch down in front of the birds--chickens, turkeys, pheasants, doves, ducks, etc and smiled and waved at them all...she was very reluctant to leave their cages. I think she would make a great veterinarian. 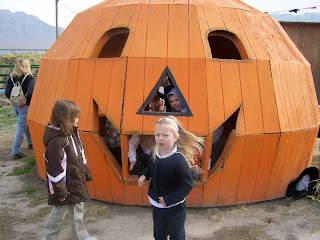 Isn't this cool? a huge wood pumpkin. None of the girls were willing to get in and stick their heads through the holes so I could get a picture though... 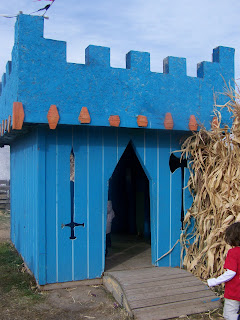 I decided if I were a little girl again I would want this castle in my back yard. It wasn't very interesting inside, but I loved the outside. 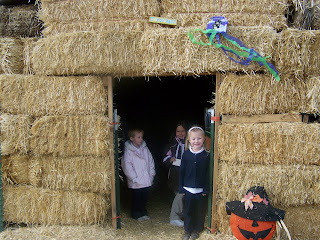 Then there was this hay-house. It was pretty cool. 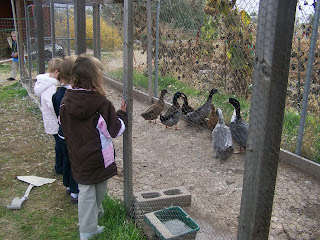 Then we went to see the ducks. They were so scared of people, it was actually pretty funny to walk away and then come back and they would walk as fast as they could to the back of the cage and to the other end when necessary. Poor things. 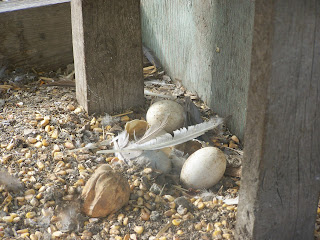 We found a few of their eggs though. The girls decided that we should cook the eggs and have omlets rather than let them hatch and have little baby ducks. I pretty much doubt that either options would be possible...the eggs looked like they had been there for a long time-neglected. 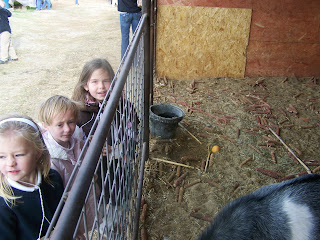 We had some time to kill so we went back to see the goats again. One kept trying to get a piece of paper that was on the ground just out of reach of its tongue--it was entertaining watching it try to get the paper. 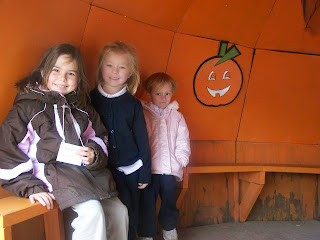 And then I took pictures of the girls inside the huge wood pumpkin. I am glad that Errina participated--she was just so shy, it was killing me! Everywhere she walked she kept her head down...I kept reminding her to look up and see the neat things around her. She would look up for a second and then her head went right back down again. Oh-well. 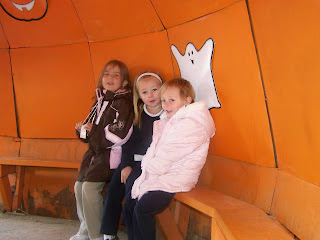 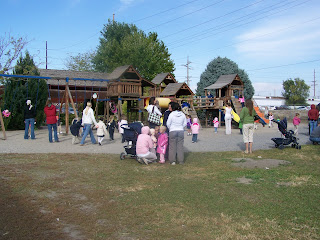 We thought the field trip was pretty much done and we deaded to pick out the girls' pumpkins, but were surprised to see this huge playground instead. I let the girls play for a while. 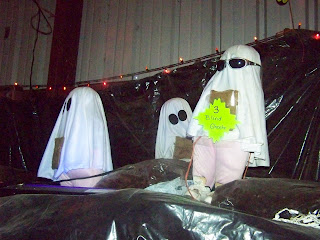 After the playground we went down the spook-alley. Not at all scary. They had cute little displays of decorations 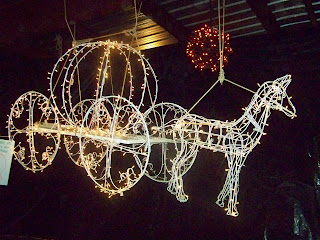 Including Cinderella's stage coach and horse 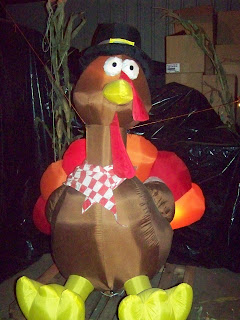 A huge inflatable turkey...Ashleigh reminded me that "daddy knows how to make a turkey noise mom, it's so funny!" 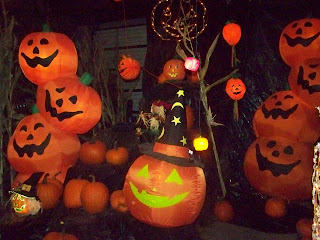 And of course a lot of pumpkins at pumpkinland 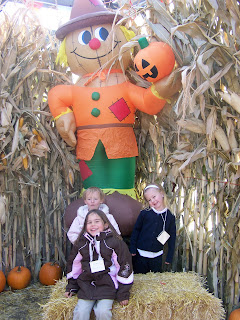 I also got a couple group shots of the girls. 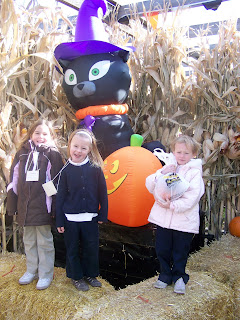 I forgot to take a picture of the millions and millions of pumpkins they had there...each of the students were able to pick out a pumpkin and take it home with them. They actually took it to school and for the next week they are going to be doing pumpkin related projects--painting them, cleaning them out, counting the seeds, carving them, etc. Ashleigh is allergic to the insides of raw pumpkin so she won't be able to clean them out or carve them, but she'll have fun painting them.

I had a lot of fun and I can't wait for the next field trip that I can help with again. :)
Posted by Nick and Meg at 8:16 AM

FINALLY! Yeah, you know what I'm talkin' about! It's about time you showed me some love!
Cute pictures. Ashleigh looked like she had a great time.

Oh that brings back memories of doing that stuf with my kids. I still remember when I went on the bus with Nick once when he was in about 3rd or 4th grade and one of his little friends asked if I was his big sister. I could have kissed that little guy. Wow, what a compliment. You are a good mommy! Ashleigh is a lucky girl...