About a month ago I got a flier on my door about a 5k race. Normally, I wouldn't take a second look at it, but something caught my eye. It was a race to help raise money for a family. Their little boy-Austin-has cancer. He is 4. Their medical insurance runs out in December and so the race was to raise money to help them pay their medical bills, etc. It kind of tugged at my heart strings a bit and I decided that I would participate. I mentioned it to my sis-in-law Jana and my sis-in-law Quinn and immediately they were both on board! Quinn also invited her friend Traci. The race was on Quinn's birthday--Nov 8, 2008. (It was fun trying to text Matt to find out how far along Arah was with delivering Sarah while running/walking in the 5k) 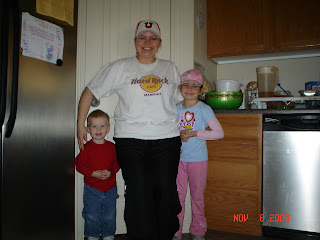 Nick had a charity golf thing the same morning as the 5k so I opted to take the kids with me-since I wasn't really competing, for me it was a good way to help the family raise money and awareness, and for me (and the kids) to get out of the house and get some exercise.
Preston, Me and Ashleigh 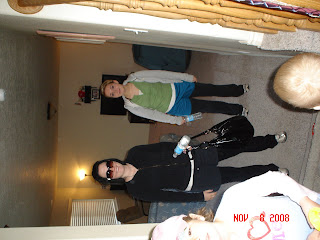 Quinn and Traci arrived. Don't they look cute!? They have been running every other night already so they were much more prepared than I was. 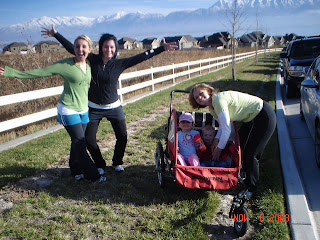 We've arrived at the race! Jana lent me her double jogger stroller--definitely necessary! 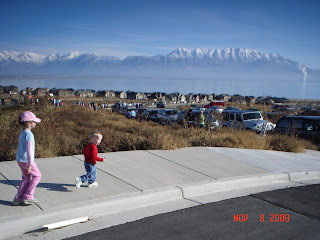 Ashleigh and Preston-heading to the start of the race. We were a little late and ended up crossing the start line almost 3 min in to it. Oh-well-like I said, I wasn't in a competition, I was there for fun! 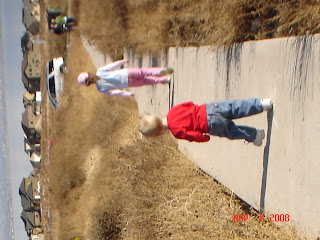 Quinn and Traci went a head of us. I think they were really going to try to push themselves and do a good run.
Jana and I stuck together and ran when we could, walked when we couldn't run, and stopped when the kids were in need of something-get in the stroller, get out of the stroller, "Jana, hold me", "I want a snack", "I need a drink of water", etc... 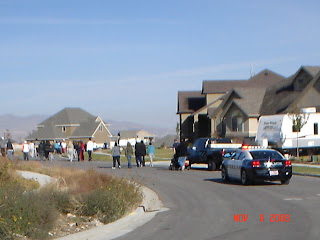 That police car is supposed to be at the back of the pack, but because we were so late, they went ahead of us.
We were able to pass them many times over though! 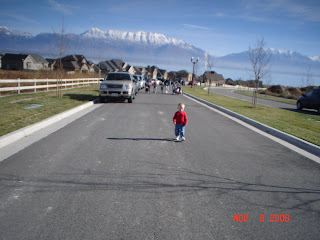 I had to take this picture of Preston--he threw a little fit cause I wouldn't let Jana hold him anymore--I told him he could either walk or go back in the stroller. He chose to lag behind and pout and whine for us. Eventually we got him back in the stroller.
Can you see the people behind us? ha ha...we were not in last place! woo hoo! 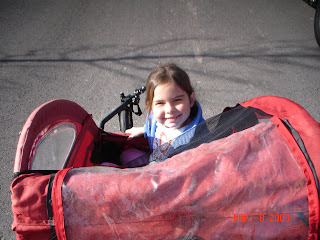 Ashleigh decided she had had enough and took a ride in the stroller. She was great--never complained-except when Preston hit her. And she saw a couple of her friends at the race too. 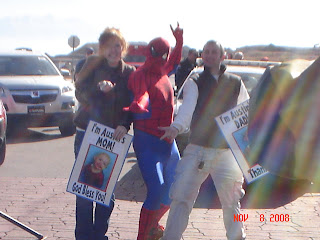 At the last turn before the finish line I saw these people--then I read the signs they were holding- "I'm Austin's MOM" "I'm Austin's DAD"
Oh man, I literally just burst in to tears! (I am again while I write this!) I handed Jana the stroller and I went over and gave them both a big hug and said "God bless you both! Our prayers are with you both and Austin! Thank you for organizing this so we could be able to help!" And I just cried!!! Austin's mom started crying too. It was such an emotional moment! I just can't imagine my child being so sick and not being able to fix it like you can when your child just has a cold. They are amazing people. I am so glad I was able to meet them! 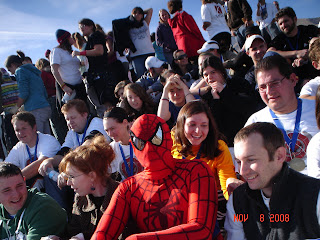 After the race they handed out cut up bananas and oranges and gave out bracelets and metals--see the necklaces they are wearing? then get got a big group picture of all the participants-should be on their web site soon. I took this picture with my camera while sitting down after they finished taking the group pic...I was sitting right in front of Austin's mom and dad and Spiderman. Preston thought that was pretty cool! 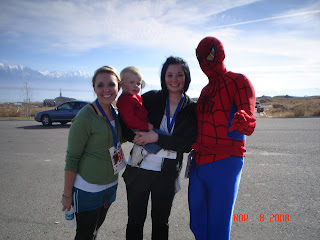 Before we left Preston kept pointing out Spiderman so we asked if we could get a picture with him. Preston decided that Spiderman is much like Santa--cool from a distance, but up close he's a litte more scary. He didn't cry for the picture though, I think that was mainly due to Quinn holding him. 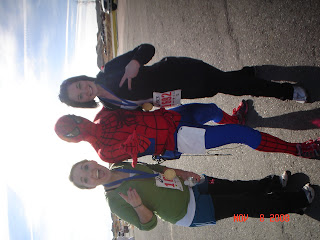 Had to get another picture of Quinna and Traci with Spiderman.


This was an awesome experience and I am SO glad we all did it together! I hope that we do many more in the future! :)
Posted by Nick and Meg at 12:58 PM

what a blessing. TOo bad they can't come to st judes for free medical care.

What's with the hat, Meg? Is that yours or Nick's? Are you going to wear it for the big game on the 22nd? We may have to have a talk...

Meg,
I am so happy I stumbled onto your blog, I am Austin's Dad ~ my son is the one fighting leukemia. Thank you so much for putting Austin's story out there and coming to support the race. Morgan and I remember you and thank you for your kind words on race day. Austin is doing well these days he just finished what could be his last round of chemo, granting he goes into Complete & Molecular Remission, a fancy way of saying that all of the cancer is gone. He was able to get his NG tube out this week as well. He is just such a happy little spiderman, for now we wait while his immune system plummets over the next 4-6 weeks and then slowly rebuilds. If he can get through this phase we have made it out of the thick of it. Again thank, much love, & God Bless.
The Shamy Family

You're one step closer to becoming a runner! I'll get ya there! Good job!